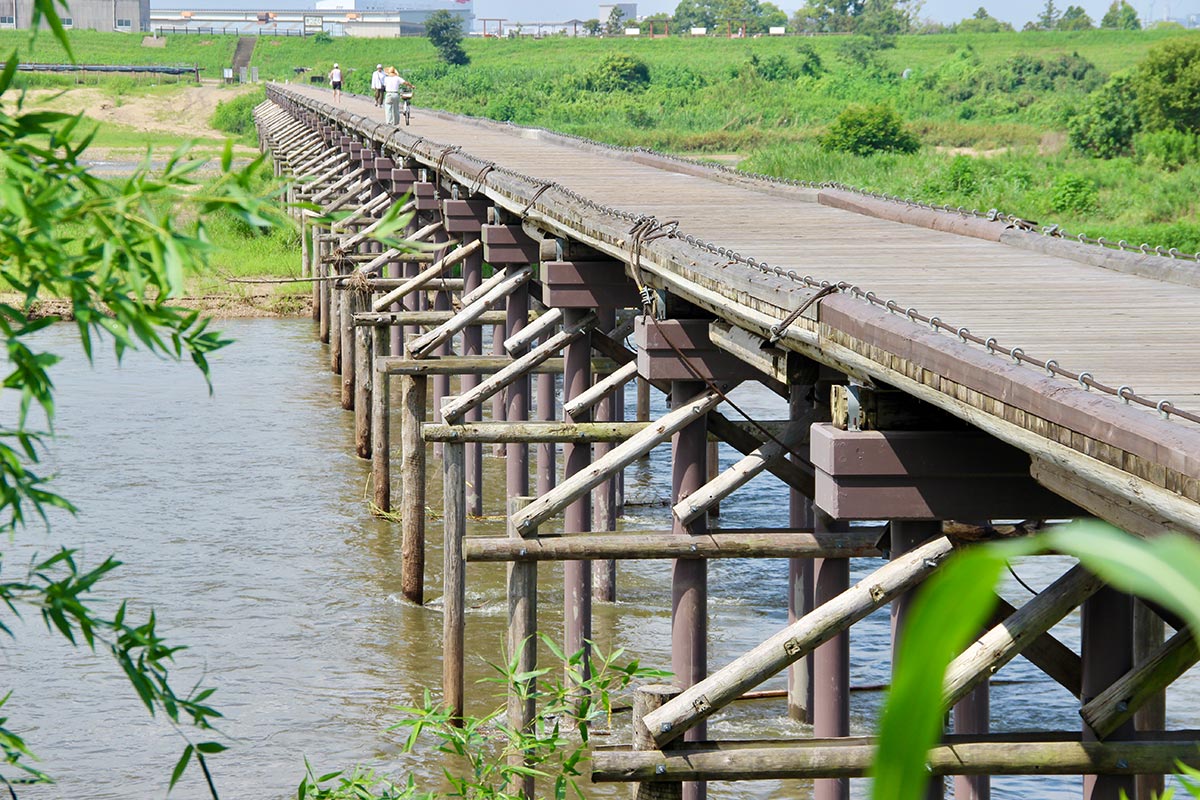 Summer 2020. We arrived in Japan in mid-July and rented a small house through airbnb.com near Kyoto.
We got bicycles that we could use to move around. Not so far away, there is a very famous wooden bridge which is often used in Japanese films about life in Japan before the modern era. This wooden bridge has the characteristic of detaching itself in case the water of the river (Kizu-gawa) rises so high that it submerges the bridge. Thus by being detached in several parts, the bridge floats and it is put back in place once the water goes down and so it nevers breaks. You can see a drawing in the photo below.

The day I went to see the bridge by bike it was very hot and the water level in the river was very low. It is an old wooden bridge and it has parts detaching by themselves from the pillars in case of high water.Crrossing the bridge is allowed by foot with the bike on your side. It's very long, 356.5 meters. I took time to enjoy the crossing for the first time and continued my bike journey along the river on the other side. There is a special road made only for pedestrians and bicycles, and one can bike and bike as much as one wants in a quiet environment. And of course I crossed it again on my way back.
I went there and crossed the bridge few times, because on the other side of the river, the bike road is so good, so it is a real pleasure to ride a bicycle and watch the tea plantations and the surrounding nature.

Some official notes from the Japanese wiki:
Kozuya-bashi Bridge is a bridge over the Kizu-gawa River connecting Kumiyama-cho, Kuse-gun, Kyoto Prefecture and Yawata City. Because its unique structure is so fragile and can easily be swept away by the river after times of heavy rain, it is called "Nagare-bashi," or a bridge that is easily swept away. It is 356.5 meters long and 3.3 meters wide, the longest Nagare-bashi in Japan (as of October 2007). It is part of Yawata-Joyo Route on Kyoto Prefectural Road 281. It is dedicated to pedestrians and bicycles. Information on the location.

History
1953: It was built to replace a river ferry service. It was known as a Nagare-bashi from the beginning.
August 1953: Its bridge beam was swept away for the first time.
It has been swept away at least 15 times when the river is swollen by torrential downpours, typhoons, and heavy rains during Tsuyu (Japan's rainy season).

Structure
Its beam is only placed on the footing so that high water can carry it away, in contrast to a usual bridge beam where the beam is fixed to the footing. The idea is to let it go without resisting the water. Its structure also prevents high water making things washed downstream pile up between the beam and the piers to form a dam and break levees. The beam consists of eight separate parts each connected to the pier with ropes so that they can not be carried away downstream. 17 piers out of 73 in total are made of concrete. The TV program 'Tantei Night Scoop' made by Asahi Broadcasting Corporation showed that the number of woodblocks for the bridge floor turned out to be 1784 in its broadcast of June 8, 2007, but after a fire probably caused by a firework burned some of them on August 28 of the same year, the repair work made the precise number unclear again.

Other
There are no private houses or electric poles in the area around this bridge, because it is outside the levees (the river is on the "outside" of a levee). This bridge is famous as a location for samurai movies because its wooden structure fits the atmosphere of the era. 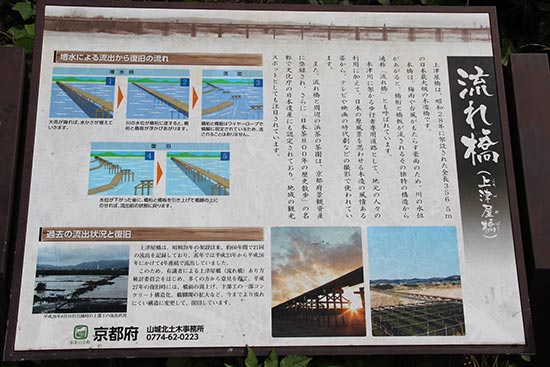 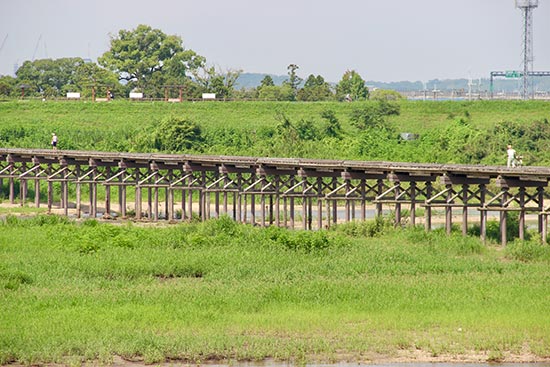 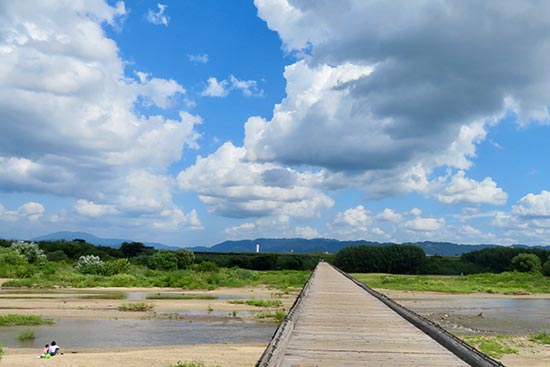 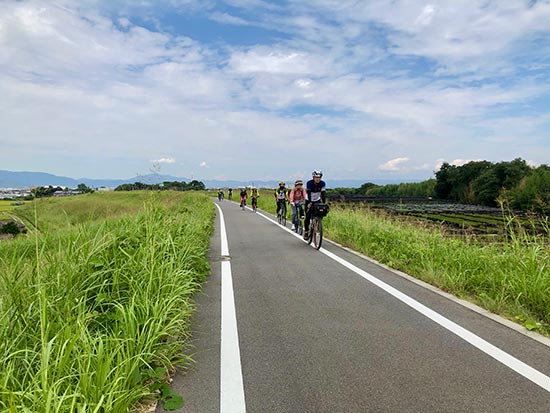 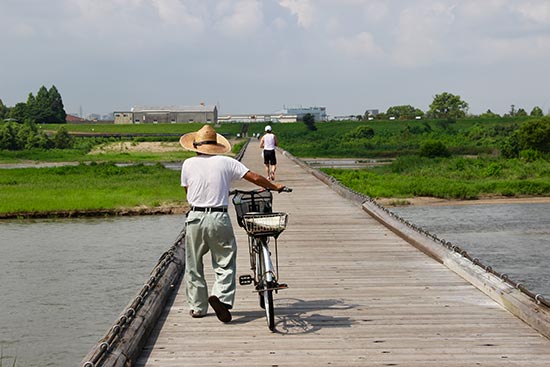 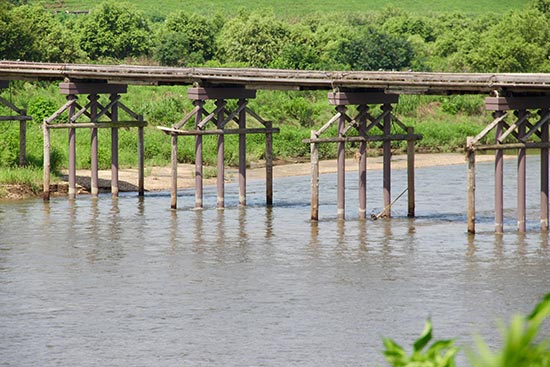 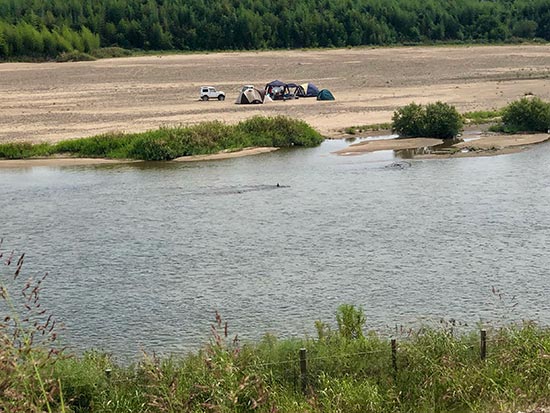