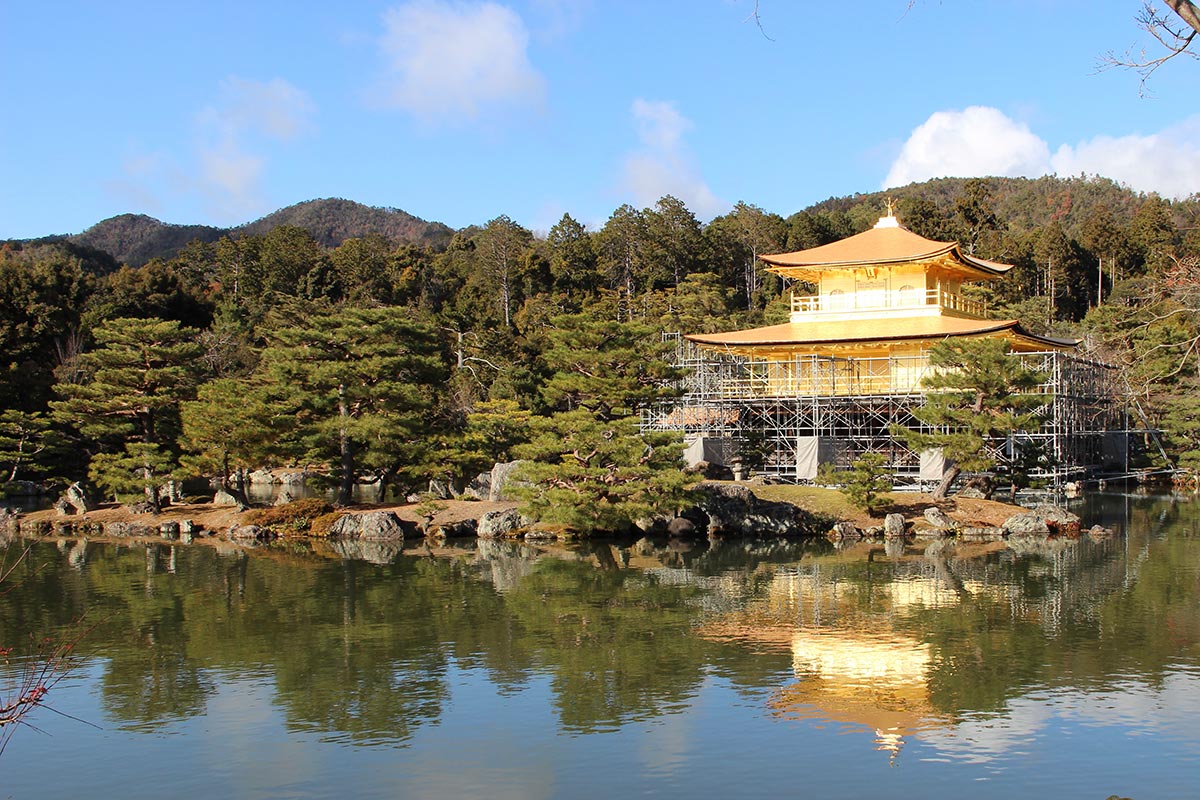 We visited Kinkaku-ji on December 17, 2020
Few hundred meters before the entrance, there was a big sign and people telling us that restoration work had been done and the temple was still surrounded with scaffolding. So it was our choice to go or not.
But it was okay with us, we just came out from a nice lunch at Vejisara, a restaurant with organic food we discovered some weeks before.
The women owners told us that they heard the helicopter this morning, a sign that it snowed a bit last night and when it snows, they always use the helicppter to take photos of the temple under the snow from above.
After lunch time, there was no snow left, it was still cold but sunny.
We had visited Kinkaku-ji in 2006 already but only a vague memory remained, so it was nice to see it again. We remembered of course the magnificent golden temple and its reflection in the pond. After the renovation, the whole temple was resplendent and shining under the sunlight.
To walk around is beautiful and peaceful, like in all zen or buddhist temples in Japan, they always have such magnificent and well kept gardens. After the Pavillion, we reached the tea house and we had a macha tea and a sweet at the shop near-by.
The whole place is a World Cultural Heritage Site since 1994.

The pond with the Golden Pavilion, and islets large and small, is the center of the garden. Rocks donated by various provincial lords of the period ar placed throughout the garden. As a pond garden designed for strolling, it is typical of the Muromachi period. The garden is listed as a National Special Historic Site and Special Place of Beauty.
From the flyer given with the entrance fee.

The site of Kinkaku-ji was originally a villa called Kitayama-dai (北山第), belonging to a powerful statesman, Saionji Kintsune. Kinkaku-ji's history dates to 1397, when the villa was purchased from the Saionji family by shōgun Ashikaga Yoshimitsu and transformed into the Kinkaku-ji complex. When Yoshimitsu died the building was converted into a Zen temple by his son, according to his wishes.
On 2 July 1950, at 2:30 am, the pavilion was burned down by a 22-year-old novice monk, Hayashi Yoken, who then attempted suicide on the Daimon-ji hill behind the building. He survived, and was subsequently taken into custody. The monk was sentenced to seven years in prison, but was released because of mental illnesses (persecution complex and schizophrenia) on 29 September 1955; he died of tuberculosis in March 1956. During the fire, the original statue of Ashikaga Yoshimitsu was lost to the flames (now restored). The present pavilion structure dates from 1955, when it was rebuilt. The pavilion is three stories high, 12.5 meters (40 feet) in height. The reconstruction is said to be a copy close to the original, although some doubt such an extensive gold-leaf coating was used on the original structure. In 1984 the coating of Japanese lacquer was found to be a little decayed and a new coating, as well as gilding with gold-leaf, much thicker than the original coatings (0.5 µm instead of 0.1 µm), was completed in 1987. Additionally, the interior of the building, including the paintings and Yoshimitsu's statue, were also restored. Finally, the roof was restored in 2003. The name Kinkaku is derived from the gold leaf that the pavilion is covered in. Gold was an important addition to the pavilion because of its underlying meaning. The gold employed was intended to mitigate and purify any pollution or negative thoughts and feelings towards death. Other than the symbolic meaning behind the gold leaf, the Muromachi period heavily relied on visual excesses. With the focus on the Golden Pavilion, the way that the structure is mainly covered in that material creates an impression that stands out because of the sunlight reflecting and the effect the reflection creates on the pond.
Source Wikipedia 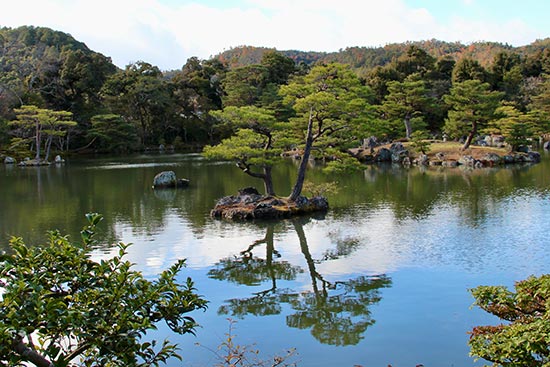 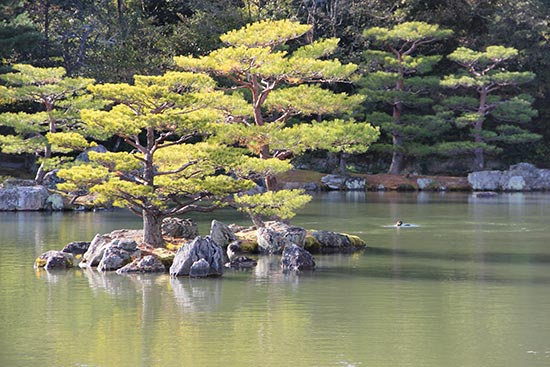 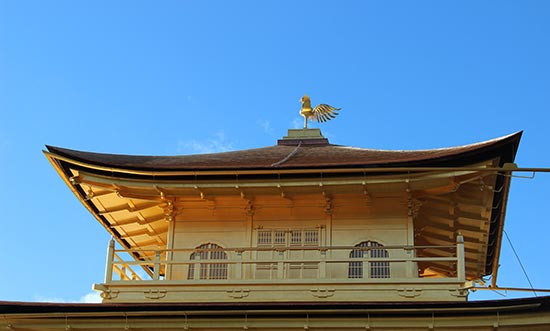 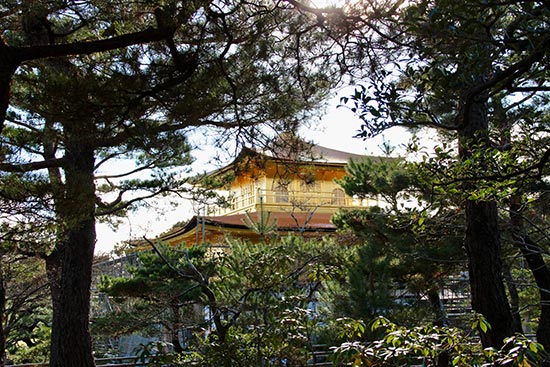 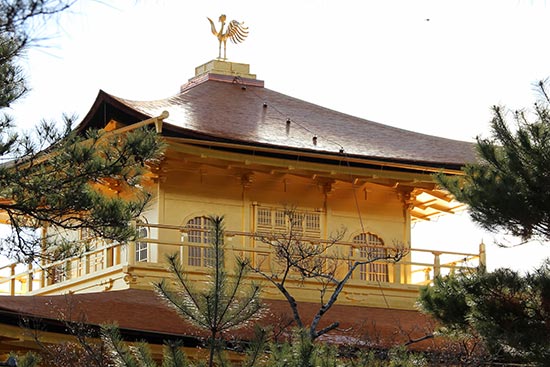 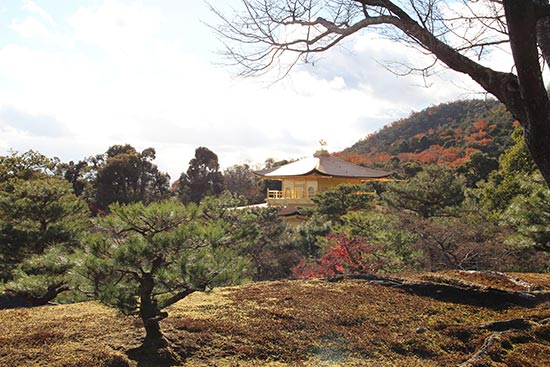 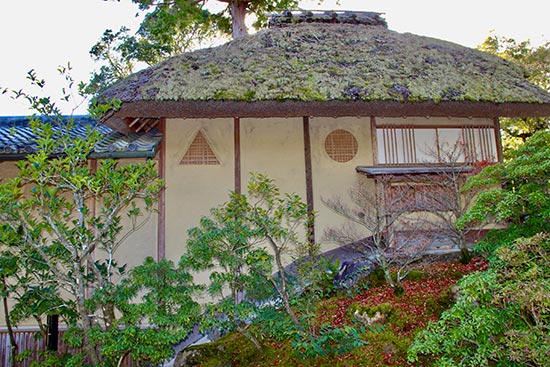 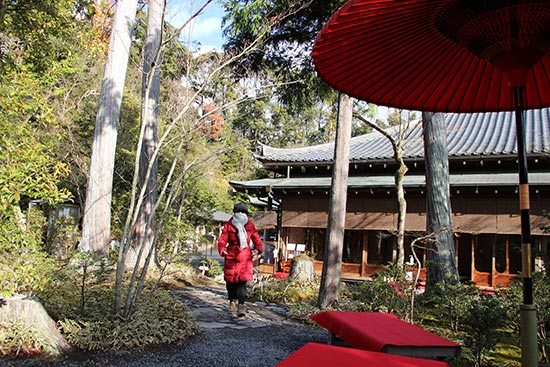